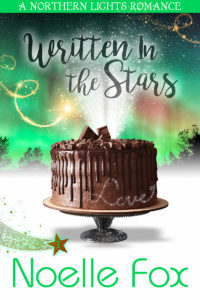 Miserable after her restaurant’s failure, when chef Grace Cooper receives a deathbed letter from her father, who she thought was already dead, offering a free vacation at an Alaskan resort, she jumps at the chance to learn about her dad and to get some rest.  Instead, on idyllic Polaris Island, she bumps into the still-irresistible Connor Reed, a humiliating nightmare from her past, and discovers shocking truths about her father.

Connor has no idea why Grace hates him. But one look at the woman he’s carried in his heart for the last seven years convinces him that his philosophy of living only for today has to change. As Grace’s brittle shell crumbles, Connor starts dreaming of his future—with her. 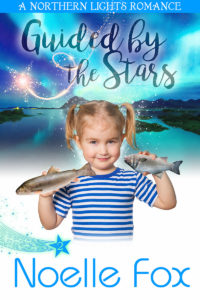 After Dr. Hannah Shaw’s four-year-old daughter recovers from pneumonia, graduating from her medical residency is anticlimactic. When the letter arrives offering a free vacation, Hannah is tempted by the chance to recharge before starting her new job in St. Louis.

In Alaska she meets marine biologist Luke Baldwin, who seems to show up everywhere she turns.  Gradually Hannah starts reimagining her future as a doctor on Polaris Island. Until the truth about her father and her need to protect Bree bring reality crashing in.  With her trust shattered, can she allow Luke to guide her on the path to everlasting love? 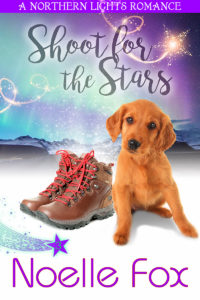 Accountant West Alden vows to get out from behind her desk and change her life. She jumps at the chance to fulfill a bucket wish by traveling to Alaska. Maybe she’ll even lose those last, pesky five pounds.

On Polaris, she falls for the island, and a certain stick-in-the-mud lawyer who becomes more fun and sexier every time she sees him. The vacation is the best thing that’s ever happened to her . . . until her castle in the air tumbles down.

Can West forgive the betrayals in order to have a future with the family she didn’t know she had, and the man who taught her how to love not only him, but herself? 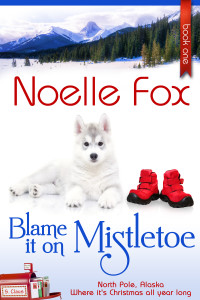 Abby Baxter has spent the year since her husband’s death trying to hold on. When she discovers her son is missing, her entire world trembles— until her husband’s best friend appears at her door. Secretly in love with Abby for years, Frank Machado is determined to see JD back in his mother’s arms. Sparks fly, hearts warm, love—and Christmas—are in the air. Should they Blame it on Mistletoe? 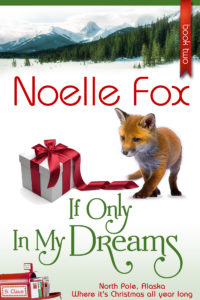 Jilted in North Pole, Alaska, café owner Amelia Beckett’s bad man-karma has struck again! She wants out of this cutesy town—until a snarling, injured fox in her backyard sends her running to strong, silent neighbor and café regular, Wes Curtis. Wes moved to Alaska after his wife died, not expecting he’d need to brush up admittedly rusty dating skills so soon. But moonlit nights spent helping beautiful, skittish Amelia and the fox relax and heal make him determined to convince Amelia she belongs in Alaska—with him 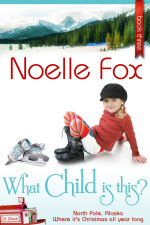 Hope Grayson’s six-year-old daughter clearly wants a daddy for Christmas; Hope hasn’t told her she already has one, a man who doesn’t know she exists.  When Eli Thompson unexpectedly shows up to help in the clinic where she works as a nurse, Hope is stunned. She is determined to protect her child and her heart . . . but is it possible Eli is the perfect Christmas present for them both?

Cozied up Together: Books #1-3

Enjoy all three of the above books!  You get all the fun of Christmas and North Pole in one package.  The mysterious gifts of the town’s anonymous Secret Santa.  The budding . . . then not budding . . . then budding again . . . romance of Clara and Rudy. Plus all three light and heartwarming romances.  A bargain few can resist . . . 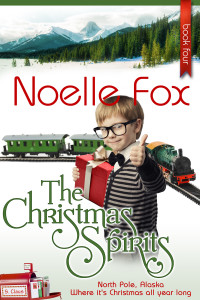 As heir to the majestic Silent Night Hotel, Grant Drummond is as determined to preserve its masculine pioneer tradition as the new flaky marketing director Willow Raine is determined to open it—and him—to the healing mindfulness of the twenty-first century. Their opposites-attract battles are further complicated by the mischievous intervention of the hotel’s legendary ghost couple. By the time North Pole gathers for an elegant Valentine’s Day Ball, Willow and Grant can only be sure of their hearts. 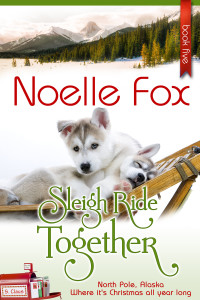 Ella Conway is determined to run the Iditarod race in honor of her dead father, but she needs the  assistance of former champion, Kody Lord, to complete her training.  After the death of his wife following the Iditarod, Kody swore he would train only sled dogs, not people. When Ella arrives at Sled Dog Safari, Kody prepares to send her packing . . . but seeing Ella interact with her dogs touches something deep inside him, as does Ella herself. However when Kody leaves her at the starting line, Ella fears she’s seen the last of him. Can she continue with their relationship knowing that everything she loves causes him pain. 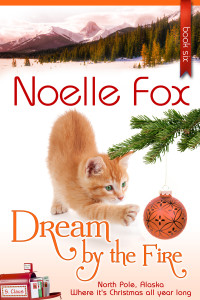 Elementary school teacher Lucy Harper is desperate to leave her old life and her control-freak ex-husband behind. But she doesn’t plan on needing to be rescued by the hunky Police Chief, Deacon Stone. Dealing with North Pole’s recent problem with pranksters was bad enough. Deacon doesn’t need the added hassle of Lucy, no matter how attractive he finds her. Yet the more time he spends with Lucy, the more intrigued he becomes. No matter what happens, Lucy maintains a positive attitude. And when her ex-husband finds her, Deacon doesn’t think twice about putting his life and his heart on the line to protect her.

Book 4-6 all together, like birds of a feather should be.  Enjoy a Valentine’s Day ball in a haunted hotel, an Iditarod dash for love, a handsome, jaded cop tamed by a fiery redhead, and of course more of Rudy and Clara and the wonderful place that is North Pole, Alaska. 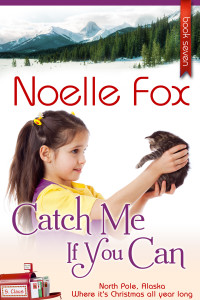 Child psychiatrist Dr. Ingrid Roth knows she’s viewed as cold and unapproachable by North Pole’s residents, but she’s still too raw from an abusive past to want to get close to anyone.  Fun-loving veterinarian, Moses Lazlow, isn’t buying Ingrid’s ice woman persona. Underneath the sharp humor and tight control, he sees a funny, sensual woman waiting to be sprung free. Pursued by Moses into a chaotic world of passion, new friends and old slobbery dogs, Ingrid feels her protective shell cracking around her. But can she trust Moses who claims she’s the catch of a lifetime? Or is he still just enjoying the chase? 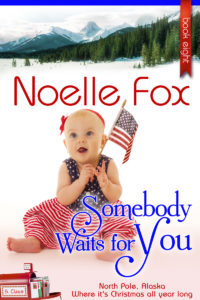 Paige Turner, owner of the bookstore, Let it Snow!, can’t believe that GT Knight, mega-bestselling but ultra-reclusive romance author, will be meeting her public for the very first time in Paige’s little shop. To top things off, one of her best customers, the shy bush dweller she thinks of as “Bigfoot, but cuter,” has suddenly started talking to her.  Ford has a reason for living in the bush, for being off the grid and for using the Wi-Fi at Let it Snow! rather than buying his own. He knows he should tell Paige the truth, but he’s been crazy about her for so long, he is dazzled by every minute he spends in her company.  When the truth comes out, will their fledgling romance die a quick, painful death? 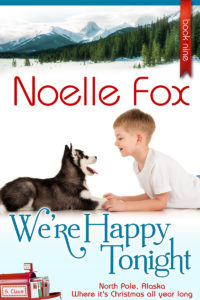 Crystal Milbrath, owner of the Lords and Ladies hair salon in North Pole is shocked by her ex’s remarriage. Determined to make the most of a weekend alone, she’s swept away by a handsome man she assumes is a cruise ship passenger. One perfect, cathartic night, now back to real life.  Except she soon finds out Levi is still around, and that he considers their one night stand only the first of many.  Levi Ericson enjoyed every moment with Crystal, though their time was cut short by her son’s return. Since he’s learning to fly the bush plane he intends to purchase, he has no plans to leave any time soon.  Can he convince Crystal to give love another try . . . with him?

Three tempting tales together:  1. Catch Me if You Can.  Ingrid Roth, the town’s icy child psychiatrist thaws when she is pursued by North Pole’s hot veterinarian, Moses Lazlow; 2. Somebody Waits for you.  Paige Turner, owner of the Let it Snow! bookstore, gets under the skin of a shy mountain man who lives in the bush, and the shock of her life when she finds out who he really is; and 3. We’re Happy Tonight.  Poor lonely single mom Crystal gets more than she bargained for and just what she wants, when a sexy one-night stand she assumes is just passing through, turns out to be moving to town.  Light the fire, huddle into the blankets and enjoy all three stories in one! 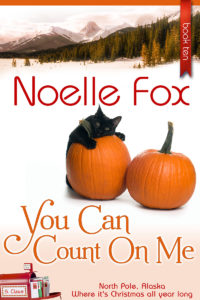 After Vivian Pukajaak’s parents were killed in a whaling accident, she wanted nothing more to do with the traditional Inupiat ways her family held dear. She’s made a good life in North Pole; unfortunately, in such a small town, it seems like every guy she might consider dating has recently fallen in love.  Anik, famous Inupiat artist and expert on tribal culture, returns
to the town he fled after high school, hoping he won’t be recognized as Abram Silaluk, the bullied fat geek who had a serious
crush on Vivian Pukajaak. In spite of his secret and her troubled past, Vivian and Anik are drawn to each other. With North Pole going Halloween-crazy all around them, can they put their ghosts to rest? Or will heartbreak and mistrust keep
them forever apart? 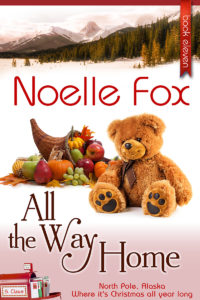 Ivy Templeton is determined to rehab North Pole’s Shining Star Bed and Breakfast alone, but her only guest, author Jonah Stark, keeps offering to help instead of writing his latest thriller. In spite of having been burned by lying boyfriends, Ivy struggles to keep Jonah at a distance, emotionally and physically. He seems to be a guy she can really trust. Jonah Stark, private investigator by day and thriller author wanna-be by night, was hired to dig into Ivy’s background by a woman claiming to be her sister. Deceiving Ivy about his real reasons for being in North Pole becomes torturous as Jonah develops feelings for her.  But when unexpected truths about the investigation come to light, he is forced reveal himself to protect the woman he loves—with his life if he has to. Will Ivy forgive and forget long enough to give him a second chance? 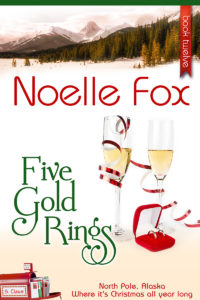 Troy Porter screwed up when he let Lindsay Lockheart go after tragedy ripped them apart. Unable to move on, he comes to North Pole in search of closure. But he doesn’t count on the matchmaking efforts of the town’s spirited and hilarious “Elves.”

Content to leave their painful history alone alone, Lindsay tells Troy to take a walk. But as he stubbornly stays put, Lindsay finally begins to acknowledge past feelings and faults. When the Silent Night Hotel offers wedding packages for five local couples, she’s appalled to find the walk she now imagines Troy taking is down the aisle with her.

Enjoy the final three books of my North Pole Series as three more women are happily paired off and Rudy and Clara finally tie the knot!